DEC released ULTRIX for the DECstation with release 3 in 1989. ULTRIX 4.0 already came in 1990 and quickly most DECstation and VAX machines were running some release of 4.X. When people think of ULTRIX, they usually remember some 4.X release. ULTRIX 4 is based on 4.2BSD + some 4.3BSD + some System V. ULTRIX never received some modern features like shared libraries. Early 4.X releases sometimes had nasty bugs and people kept upgrading until it was stable. The last release was 4.5, released in 1995, but only few sites actually ran it. DECstations weren't really important by 1995 and there was little to be gained over 4.4 or 4.3A. ULTRIX comes with a full development system, TCP/IP, NFS, and so on. ULTRIX/RISC ships with a port of the MIPS C-Compiler. ULTRIX/VAX has the older VAX C compiler. In general, ULTRIX releases become better over times as bugs get fixed by newer releases. Unless you are into serious retro-computing or have many machines and want some diversity, ULTRIX 4.5 is the version to go for. Compaq has released a Y2K patch kit for the last ULTRIX releases, which is also nice to have. The ULTRIX 4.5 release of this patch kit fixes several other bugs, patches the libc, and so on.

There are two potential X11 environments for ULTRIX: DECwindows/XUI and DECwindows/Motif. Motif is much bigger and slower. If you have a slow machine like a VAXstation or a DECstation 3100, you may want to keep XUI and avoid Motif. Later ULTRIX releases offer a choice of desktops during installation. You can't have both installed at the same time. On the other hand, you might want to replace it all with a generic installation of X11R5 or even newer.

ULTRIX got the ability to use and install on generic SCSI disks with 4.2. There was a bug in the disk driver that corrupts data on disks larger than 1GB on ULTRIX release 4.2 and earlier. A fix was introduced in 4.2A. If you have an ULTRIX release that can handle large disks, you are only limited by a maximum filesystem size of 2GB. ULTRIX has classic BSD disklabels and counts filesystems from "a" to "h". Filesystems can be up to 2GB in size. You can use larger disks with multiple GB if you partition the disk carefully.

ULTRIX 4 requires license PAKs ("Product Activation Key") like all the other DEC operating systems. A two-user system will boot up fine without any licenses installed. Having more than two users and using layered products needs extra licenses.

When you look for ULTRIX, you should also search for the "software product library" or "layered product software".

Installing ULTRIX on a DECstation

DEC released a Y2K patchset for ULTRIX 4.3A and later:

load patchsets Base and UWS

ULTRIX /bin/sh is an ancient Bourne shell. It is best to replace it:

ULTRIX provides ris, as a way to install from the network. It is easy to setup by scripts.

A common failure is this:

If this happens, make sure:

ULTRIX 4.1 contains a floating point signalling bug. a patch is supplied with and needed for DEC Fortran.

ULTRIX 4.1 on RISC is also full of bugs. It is really best to avoid that version.

make sure there is enough swap space!

ULTRIX can only swap on partations that are configured in the kernel.

important note: the ULTRIX kernel cannot be built with any GNU tools in the path

some save sets were unreadable from the distribution tapes. unable to install X11 UDTEXER

ULTRIX 4.0 does not remember the correct ethernet device. Installation assumes that ln0 is correct. Drop to system shell and /etc/ifconfig ln1.

the colon is necessary! 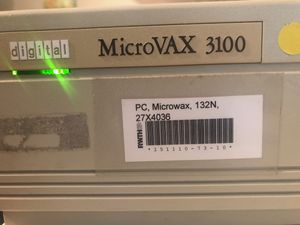